Hang in there; we are almost done with the tutorials. After that, you can enjoy creating your stages. Let’s go and create the last bonus crate.

This should not be too difficult a task if we were to do it via the traditional way of using game objects to create the scene. But it becomes tricky because we build the scene using tilemaps; there appears to be no way to paint the tiles programmatically as we are unable to access the tile palette from code(at least I cannot find any).

But Unity has allowed us to copy tiles from tilemap using code. So by doing creative usage of the and routines of library, we can paint tiles with code. What we will do is to use a tilemap as a .(I created one at the beginning, now you know why I called it Tile Palette).

Let’s start by putting the TilePalette TileMap on top so that we can see it by changing its Order by Layer to 3. Change the Active Tilemap to TilePalette then paint the brick tile at position 0,0 and steel tile at location 1,1. Then change the Order to Layer to -2, so it will not appear on the scene.

The position you choose to paint doesn't matter. I selected mine for easy identification

We start by creating a script in the Grid Game Object calling it . Add the Library UnityEngine.Tilemaps at the top of the script.

The concept is to remove the brick tiles at the location from Brick TileMap and replace it with Steel tiles on the Steel TileMap then vice-versus to revert. So we can create a single routine to do both by taking in the position, tile to change to and the tilemaps. Let’s call this routine . The code as below.

To use the Tilemaps, we will need to get their reference in code. Declare 3 variables called with . Then drag and drop the Bricks, Steel and TilePalette tilemap in the Inspector.

With this in, it will be easy to use the code below to trigger the UpdateAndRemoveTile routine.

Above is an example of updating the brick tile to steel tile. We first get the position of the steel tile in the TilePalette tilemap. Then use the routine to get the tile information. Then we pass the information to UpdateAndRemoveTile routine to do the hard work.

We need to run the same command on the 6 tiles surrounding the eagle twice(once for turning brick to steel and then for steel to brick). We can split it into 3 routines to shorten the amount of code we need to write. 2 of the routines() will be to pass the tile info and tilemap into the routine() which will run the UpdateAndRemoveTile 6 times on the position surrounding the eagle.

Finally we need to create a coroutine to have a timer rundown so that we can have the effect of the steel wall turn back to the brick wall after a period. Then have a Public routine to start the coroutine. This will allow the Spade Bonus Crate to trigger the routine to activate the coroutine.(remember a Game Object that is going to be destroyed cannot start a coroutine as it will cancel the coroutine as well)

Now we can create the Spade Bonus Crate. Start by dragging and dropping the Sprite you have for Spade bonus crate into the hierarchy which Unity will help to create the Game Object for you. Call the Game Object .Add a and assure its boundary fills the entire crate’s image, then make it a trigger. Also, assign layer to the Game Object. You should also set its to ensure it gets rendered on top of all objects. 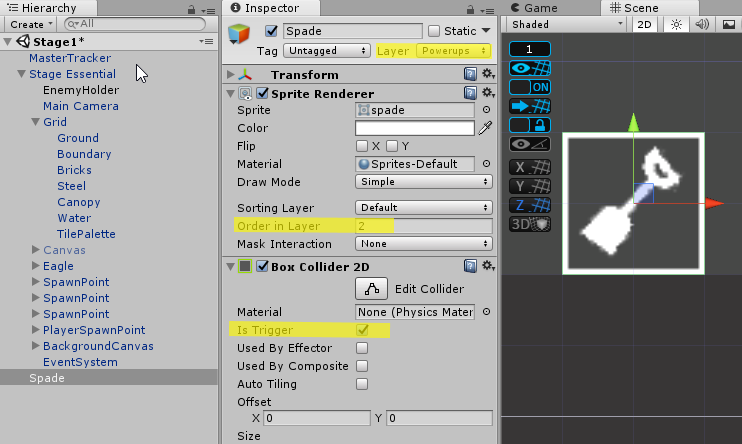 Now we will create the code for the Spade crate. Add a new script called to the Spade Game Object. Set the class to inherit from PowerUps. The full code for Spade as below.

The script finds the reference of the Grid Game Object to get to access the ActivateSpadePower routine in its script component GridMap.

Now we are ready to try out!

Perfect! We are on a roll! Let’s iron out a few details to make it more like Battle City. The first one will be the part where it is changing between steel wall and brick wall repetitively at the tail end of the timer before it completely changes back to the brick wall. To do this, we need to make ChangeEagleWallToSteel a coroutine and update SpadePowerUpActivated coroutine as below.

One item chalked off. Now to the last one. There are circumstances that a player might accidentally(cough…cough…foolishly) shoot at the steel wall with its Level 4 tank which will result in the steel wall to be damaged. In this case, the damaged part will not be filled back with bricks anymore. To create this effect, we will need to update an if statement to check if there is still a tile at a position in the UpdateAndRemoveTile routine.

Now let’s do a full test on the effect.(I have shortened the Spade Bonus timer to 5 seconds for the testing) The spade should be able to:

That’s all the Bonus Crates! Prefab the Spade crate and then update the GamePlayerManager with all the bonus crate prefabs.

That will be the end of my tutorial series for Battle City. There are of course other stuffs which I did not cover such as sounds and start menu. I want to get feedback on my tutorials from you all before working on those so that I can improve myself. So please put in the comments how I can improve! Thanks.

The game link for testing is here.