Let’s start with the easiest of the Bonus Crates - Tank bonus crate which grants 1 extra live to the player.

Start by dragging and dropping the Sprite you have for Tank bonus crate into the hierarchy which Unity will help to create the Game Object for you. Call the Game Object .Add a and ensure its boundary fills the entire crate’s image, then make it a trigger. Also, create and assign a new Layer called to the Game Object. You should also set its to ensure it gets rendered on top of all objects.

Go to the and update the collision such that only PlayerTank can collide with PowerUps layer. 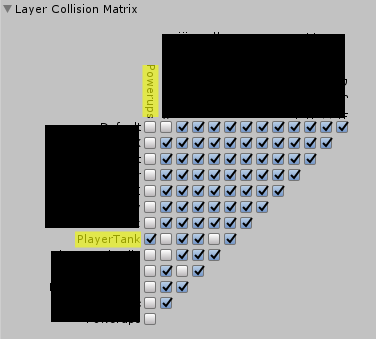 Now we start creating the effects of the bonus live. Create a script called OneUp in the 1up Game Object. Set the class to inherit from PowerUps. The full code for OneUp as below.

The code starts by triggering which gets the code from its parent class PowerUps Start Monobehaviour to run. Then in the , add one life to which is a static variable in . Then run the routine which will update the Battle Status Board of the number of lives the player now has. Once that is done, it will destroy the game object.

That’s all! We can test it already. by dragging it to the Project Window. Go to the Canvas Game Object and drag and drop the 1up prefab to the Bonus Crates under Game Play Manager (Script). We can also test the crate to not appear at silly positions effect by overflowing the gameplay area with Water tiles. We will also set the number of enemy tanks to spawn to 5 with a 100% chance of it being a bonus tank.

Testing successfully! We see that the crates only get spawned in areas where we can reach and also the effects(plus 1 life) is working! You can prefab the 1up now. Next post we will talk about the invincibility crate.