The stopwatch is the hardest for me to figure out of the bonus crates effects. The additional things we need to add on is not a lot, but somehow all the ways I tried did not seem to work. Probably someone can later comment on how it can be done better as my way does not appear as straightforward. The effects of the stopwatch are to freeze all the enemy tanks for a period.

Start by dragging and dropping the Sprite you have for stopwatch bonus crate into the hierarchy which Unity will help to create the Game Object for you. Call the Game Object .Add a and assure its boundary fills the entire crate’s image, then make it a trigger. Also, assign layer to the Game Object. You should also set its to ensure it gets rendered on top of all objects. 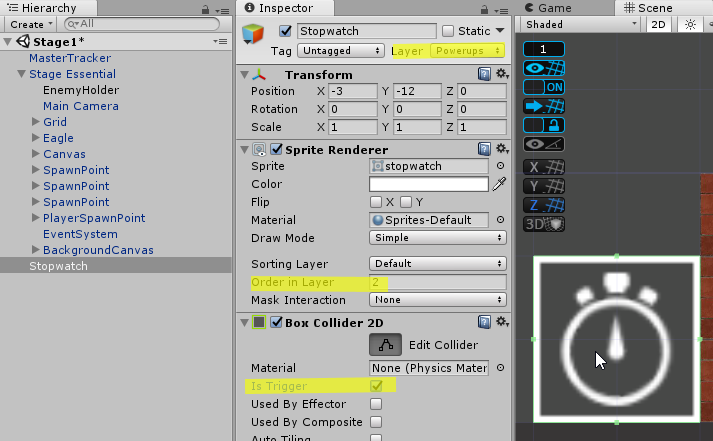 Now we will create the code for the Stopwatch. Add a new script called to the Stopwatch Game Object. Set the class to inherit from PowerUps. The full code for Stopwatch as below.

The code for Stopwatch is minimal as all it does is to call a routine in GamePlayManager. Most of the hard work will be done by the GamePlayManager. The freezing effect will only last for about 10 seconds, so this will need to be done via a coroutine. We cannot destroy the object before the coroutine completes so the best way is to pass the job to GamePlayManager to do it.

Through trial and error, I have realized the only way to freeze the enemy tanks is through the following sequence:

Just disabling the EnemyAI component won’t work as it will get enabled back by itself during runtime(I am not sure why this is happening).

To overcome this, I need to disable the GameObject first. The stopping of coroutine and invoke is to prevent the tank from moving or shooting. Then we can disable the EnemyAI safely before enabling back the Game Object for it to be visible.

For those tanks in the gameplay area, add the below code to the GamePlayManager script.

The first routine ActivateFreeze is simply for triggering the coroutine FreezeActivated. As the task needs to run over a period, the best is to do via a coroutine.

The first half of the coroutine is to do disable of EnemyAI component and stopping of the coroutines and Invoke triggered by EnemyAI. Then there will be a wait for 10 seconds before enabling back EnemyAI and starting back the coroutine and invoke by EnemyAI script. The static boolean freezing will be set to true at the start of the freezing period and back to false at the end.

We now head to the Spawner script to add in the portion of freezing the tank when spawned. This will be added at the SpawnNewTank routine as the tank Game Object will be set active then. The code is similar to the first half of FreezeActivated coroutine. There is no need to do the unfreeze as it will be handled by the second half of the FreezeActivated coroutine which will check for all the child of EnemyHolder and activate all their EnemyAI component.

Mission accomplished. Next up is the Level up Bonus Crate.