The Gamemaker controls the flow of the entire gameplay:

We will start with the first part (When and how to start the stage).

Let’s start by looking at the Start Stage Animation.

Unity will create 2 Game Objects, and . We will only be using the Canvas for this section.

The image will be created as a child of the Canvas. Rename the image as . Create another image by right click on the Canvas (). Rename the new image . Reset the transform of the two images.

Notice the canvas in the hierarchy? The sequence of the children(TopCurtain, BottomCurtain, StageNumberText, and lastly BlackCurtain) is deliberate. This sequence will ensure BlackCurtain will render on top of the rest of the items on the canvas. 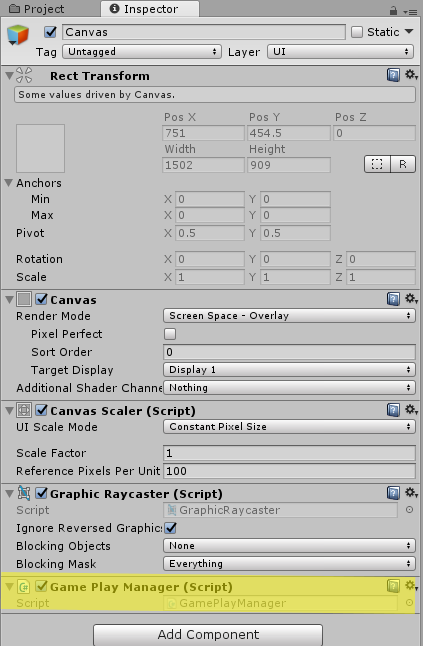 We need to use the functions available to the UI so we can manipulate the UI Objects we added. Add “” at the top of the script.

Let’s start with the revealing of Stage Number effect. All we need to do for this effect is to decrease the scale.y of the BlackCurtain until it reaches 0 so that it will show the Stage Number behind. To do that, we will use a coroutine(named ) as a means for creating the gradual decrease in size. Use a Mathf.Clamp to ensure the Scale does not go beyond 0 as a negative value will mean the curtain starts to expand in size again.

Now let’s test it. Add the StartCoroutine RevealStageNumber to the Monobehaviour routine.

Drag and drop the BlackCurtain Image Object to the GamePlayManager Component’s variable blackCurtain and press on Play.

Done. Now let’s move on the “grey curtain pulling out from the center to top and bottom to reveal the stage” effect. Let’s start by disabling the BlackCurtain Game Object. First, start by creating a variable called to store the Canvas RecTransform property, we are using it to find out the height of the Canvas.

We can't do the same like for the BlackCurtain, as the outcome will not be what we want to achieve.

Now let’s test it. Add the StartCoroutine RevealTopStage and RevealBottomStage to the Start Monobehaviour. We will comment out the RevealStageNumber coroutine.

Now let’s test the whole sequence again. Enable back the BlackCurtain if you have disabled it earlier.

That is all for the starting a stage sequence. The full code for until now as below.

Now, let’s take a look at the GameOver scene.

The GameOver portion is quite straightforward. Just a text mentioning Game Over scrolling up. We can do this easily in the GamePlayerManager script. 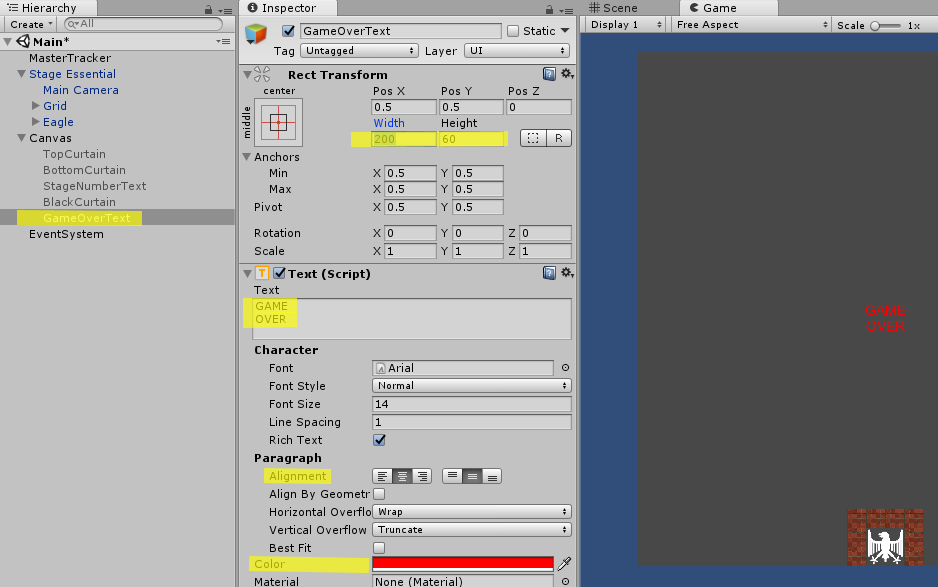 Let’s move the GameOverText to the below the Canvas so that we cannot see it anymore. We will do it by changing its Rec Transform (Anchor Min Y = 0, Achnor Max Y = 0, Rect Transform PosY = -30) in inspector shown below.

Code the Game Over

The code for Game Over is to move the GameOverText from the bottom to the center of the canvas. The Same thing as the Start Stage, we will be using a coroutine for the gradual move to position. We will need another Text Variable that is SerializeField(called ) so that we can manipulate the text’s position later.

Next is the coroutine(called ) to move it into position. Make the coroutine Public as it is required for use outside as well later.

The value in the code below (120f) is to control the speed of the GameOverText, it is derived via trial and error. It might not suit your taste so change it accordingly.

Let’s test it now. Change the Monobehaviour for to the below.

Drag and drop the GameOverText Object to the GamePlayManager Component’s variable gameOverText and press on Play.

That’s it for the Start Stage and GameOver. Next stop, we are going to talk about the LevelManager, which allows us to do some settings on individual stages.