Heir to the Movement Script

I mentioned in the previous post the Movement Script is an abstract class which needs to be inherited from to be complete. There are two scripts which will inherit from the Movement Script; one will be AI script which the computer uses to decide when and where to move, the second will be the Player Controller script which we will talk about in this post.

The script will be quite straightforward, at least for now! It will get a bit complicated later once we add in more nitty and gritty stuff. Let’s start by creating a C# script from the Project Window and name it . First, let’s set the script to inherit from Movement script by updating the class declaration to the below

The complicated part of this is deciding where to call this code. The movement is handled via coroutine which is designed to complete at the end of a frame, so the best part to have the Input.GetAxisRaw code will be in Update as that runs at every frame. This will ensure minimal delay in getting input at the next available chance.

Calling the coroutine to start moving

Since our coroutines take in 2 parameters, 1 for the GetAxisRaw value and 1 for rigidbody2d. We will need to do a at the Start Monobehaviour to get a reference to the rigidbody2d component of the Game Object we are moving.

As we are not going to allow diagonal movement, it is necessary to prioritize horizontal or vertical input. I decided to give Horizontal the priority since evasive actions will most likely be from the right and left as we will be moving from down to up to defeat the enemies.(OK I made that up, just choose either one for priority). So just do a check for horizontal(or vertical if you preferred that) if it is of value 0 before checking on vertical(or vice-versa)

Let’s save our code and test it. Drag and drop the Player script from the Project Window to the tank Game Object you left behind in the hierarchy. This will create a Player (script) component in the Game Object’s inspector.

Once done, your inspector for the Game Object should look like mine. 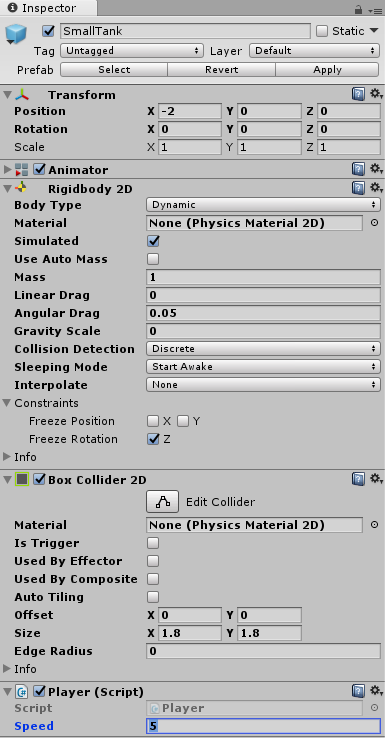 Now let’s play! Use your keyboard direction keys; it should move the tank smoothly.

That concludes the part on Player Controller. Short and sweet. Next up is on Enemy AI. Full code of the PlayerMovement until now as below.