So all we need is a Star. Let’s get to it. Drag and drop a Star Sprite into the Hierarchy, rename the Game Object created as and reset its transform. Create an empty Game Object calling it , make Star its child and .

At the Start Monobehaviour routine of Spawner, add the below code to store the references to the prefabs of the tanks to tanks array (4 for enemy and smallTank Game Object only for the player)

Create a public routine called . Below is the full code which is to instantiate one of the tank prefabs randomly at the location of the SpawnPoint.

Now let’s do some animation for the Star. We are using animation as a means of a timer(it takes about 1 second from the Star twinkling to spawning a tank). Go to your Project Window, create an and rename it as SpawnPoint. Move the Animation Controller to your preferred folder for organization. Select the SpawnPoint Game Object from the hierarchy and add an Component (). From the Animator Component, set the Controller to point to the SpawnPoint Animator Controller you created earlier.

Once added, expand the drop-down for , you should be able to see something like the below.

A white ribbon(turns blue when selected) will appear just below the 1.10 timeline. And the inspector should come up with the title “”. Select from the drop-down .

Now Click back to the timeline at point 0:00, that white line should move to that position together. Once the white line is at point 0:00Click on the Add Event button as indicated with the Mouse Pointer below. A white ribbon(turns blue when selected) will appear just below the 0.00 timeline. And the inspector should come up with the title “”. Select from the drop-down .

Click on the red circle symbolizing record to stop recording. Now your Star Twinkle animation is completed. Click on Play of the Animation to start singing Twinkle Twinkle Little Stars along with it.

Spawning the Enemies and Player

Now let’s place the SpawnPoint and PlayerSpawnPoint at different locations to see the spawn happening!

Ok. Not that good a demonstration. We will need to stop the animation from running, again and again, to prevent it spamming(I mean spawning).

Select the StarTwinkle animation and uncheck the from its inspector. 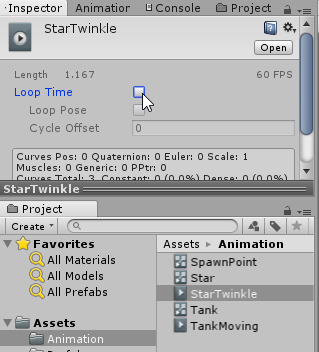 Now to complete the spawning effects. Select both the SpawnPoint and PlayerSpawnPoint. Set both its Transform.Scale.x and Transform.Scale.y to 0. This is to make the Star disappear from view. The Star does not appear by default but only whenever there is a need to spawn a tank. So it is best to set it to invisible.

The next step is a means to trigger the spawning. As of now, we can only trigger it once which is by default. What we need to do is from the Animator add another state for the animation to transit to after spawning while waiting for another call to do the spawning again. Open up the Animator Window from Unity(). Select the SpawnPoint animator from your Project Window.

Right Click on the Animator Window Base Layer and select .

From the Animator Window, go to the Parameters tab and create a trigger named .

From the Animator Window, right click on the Entry box and select . Drag the arrow to the StarTwinkle box. After the boxes are joined together by the arrow, click on the arrow and add condition Spawning to it. Do the same for Normal box to StarTwinkle Box.

Add a Transition back from StarTwinkleBox to Normal.

Perfect! So that is how we can do spawning. . All that’s left is for something to trigger the spawning. And that will be handled by the GameManager.