Sorry, we are not going to create a Skynet nor a Deep Blue nor something remotely capable of coming up with tactics to flank your tank trapping you in a corner where you cannot escape. These are beyond my meager knowledge; I apologize for my incapability. That could be something of a wishlist later if I manage to gain sufficient insight on that.

Instead, we will be using the most basic form of simulating AI, by randomness.

Heir to the Movement Script again

So what can we make random about the Enemy? The most straightforward one I can think of is its direction. By randomizing its heading, we will create a sense of AI. The code is pretty simple; we need to ask the computer to pick a random direction(up, down, left, right), then move in that direction if it’s selected. We will use to create the Direction. Let’s put the code in a routine named .

Using enum in this is up to your preferences. enum make the code longer but more readable. You can just use number 1 to 4 to represent the different direction. Of course someone else reading your code will need to know of your number assignment

With that done, all we need to do is to add the same code in Player script which checks for h and v in FixedUpdate. Remember to do a GetComponent for the rigidbody 2d at the Start so that we can pass it to the coroutine as parameter.

Determine when to be unpredictable: Collision

Now we have the means to be unpredictable; the computer needs to know when it should be erratic. Looking through the gameplay of Battle City, you would have noticed that enemy tanks always changes direction when it hit an obstacle, so we could initiate a “RandomDirection” whenever we hit a barrier.

So let’s add the Monobehaviour routine to the EnemyAI script. For now, we will only ask it to start the routine RandomDirection when a collision is detected.

Also, add the routine RandomDirection at the Monobehaviour routine . Adding the routine to start will ensure the EnemyAI will start the tank moving as soon as the Game Object appears in the game scene.

I consolidate all the code for EnemyAI until now at the below. The code below is sufficient to make a working Enemy AI. You can try out by disabling the Player (Script) component from your guinea pig Tank and add the EnemyAI script. Press play and you can see your Enemy tank become self-aware and move by itself!

Determine when to be unpredictable: Random timing

We could also put another random timer for the computer to pick a moment to do an unpredictable turn; this timer should have a reasonable before it can trigger another turn again so we need to have the cooldown take into account a RandomDirection cause by a collision. If the cooldown is too short, we might end up having the enemy tanks spinning around like headless chickens.

Lastly, we will need to have the enemy to make a reasonable unpredictable(sounds contradicting) direction change. For example, an enemy tank makes its way to a location where it is surrounded on 3 sides with barriers, so the only logical option for it is to turn around and head out. But if we were simply to trigger the “RandomDirection,” the tank will just be spinning in multiple directions until it gets lucky enough to turn to face its back and head out. That is not AI(Artificial Intelligence), that is AS(Artificial Stupidity)!

To prevent AS from occurring, we will need to check for the direction the tank can turn to in order not to look stupid whenever the RandomDirection routine is triggered. So the best place to put this code will be in…..the RandomDirection routine! We will be using a called which takes in 2 positions and a . A line is drawn to join the 2 positions and if the line hits anything that belongs the Layer specified by the layer mask, it will return true.

We will consolidate those position with a false LineCast into a list. Then the computer will run a on the items in the list to determine the direction.

We will to determine if anything is blocking their path. The code will be as below.

For the LayerMask, we will declare it as a SerializeField variable so that the layers impacted can be chosen from the Inspector.

Once we have the list of directions we can turn to; we will pass it to the selection variable after making a random selection. So the code will change from to . We can also remove the declaration of Direction array variable called direction.

Now we need to update the variable from the Inspector. Select the Guinea Pig tank and find the blockingLayer variable in the Enemy AI (Script) component. It should be showing Nothing. Click on it to access the drop-down to select the layers. Select Boundary(Steel, and Boundary Tilemap) and Water(Water Tilemap) as these are possible layers that will collide with the tanks.

A Brick tile is an obstacle the tank cannot pass through. But we would want the tank to turn to a direction where there is a brick tile as it will be able to fire and destroy it.

In the end, your selection for blockingLayer should be like the below. 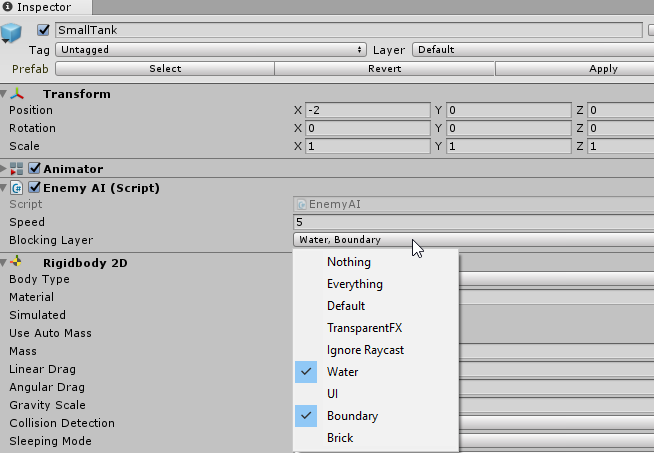 Duplicate a number of tanks in the scene. Play the game now and you will realize you have Skynet Mark II!

Below is the full code for EnemyAI. Next post I will show how we can do firing of shots.