We have CanonBalls that can destroy bricks, steel walls, and tanks, but that is still not enough unless you don’t mind keep drag a CanonBall on to the Scene all the time. Let’s now give the ability of firing shots to the tanks!

Most of the techniques for this post comes from Unity's Survival Shooter tutorial series. You can check out the tutorial if you like as it is a video tutorial available on YouTube.

Spawning of canonballs needs to be from a logical position. If we were to take the tank’s position to spawn the canonball, it would appear that the tank gave birth to the canonball before it starts flying off. So we need to set the point where the CanonBall gets fired; it should be shot from a certain distance in front of the tank to prevent that childbirth illusion.

Let’s create a new Empty Game Object as a child of the Tank Game Object. We can call this Game Object . This will act as a reference point for where the CanonBall will appear when fired. Reset the transform of Gunport then move it 1 unit forward for its transform position Y. Your offset Y position might differ from mine, who knows if you are creating a Valkyria Chronicles Final Boss size tank.

Let’s also create an easy animation. Have a sprite with an image of fire ready and drag it to the Hierarchy. Unity will create a Game Object for you(I said that a lot of times), name it . Drag the Fire Game Object and make it as a child to the Gunport. Then reset its transform and disable the Fire Game Object.

I decided to change the name from Fire to FireEffect as I have a routine also named Fire. So to avoid confusion, I decide to change name.

Now it’s time to get your hands dirty and start coding. Let’s start by creating a new C# script component under the Gunport, we will call it .

Next, we will instantiate the CanonBall, setting its position and rotation to that of Gunport and store its reference to canonBall variable. And save the reference to the Projectile script to canon. Then pass the speed value to projectile’s speed variable value. We will do this in the Monobehaviour routine.

We will also need to check if the CanonBall is inactive before allowing everything else to prevent firing of more than 1 shot at any time.(The CanonBall can only be fired again when it hits an obstacle and set inactive).

Lastly, let’s add the code to tell when the CanonBall should destroy itself. Remember the routine we created in the Post for Creating Projectile? We will be using it here. We will add these to the Monobehaviour routine of which runs code when the GameObject is destroyed.

The Tank gets destroyed so its child the Gunport is destroyed as well.

We will also add a check to make sure CanonBall is already instantiated before we run the DestroyProjectile command.

That’s all we need for our WeaponController. Full code as below.

We move back to the Script to bestow it the ability to fire off the CanonBalls! Let’s determine how we can pass command to the computer for our tank to fire the shot. I decided to set the Space Bar as the key to fire the shot as it is the largest entity in the keyboard and I definitely do not want to miss taking a shot just because I press the wrong key.

Let’s first create a variable(I’m calling it ) to store the reference of WeaponController script in the Gunport. We save the reference in the Start Monobehaviour routine using as Gunport is a child of the Tank, so we are getting the component that belongs the child of Tank Game Object.

We will use Input.GetKeyDown to detect the key pressed in the Update Monobehaviour routine. Using GetKeyDown means press and hold to fire rapidly is useless as it identifies only the moment you press down the key, we are shooting canonballs here not a machine gun! This also ensures we do not strain the Update function(I am a nice guy) to trigger the Fire command(triggered through the reference variable wc). It is useless anyway as we have coded as such in the WeaponController that you can only fire 1 shot at a time.

That’s all the code we need to let the player fire off canonballs. Now let’s try it out. Add the Player Script back to the Guniea Pig Tank and disable the EnemyAI script if you have it. Also, if not the CanonBall will start firing by itself even if without your orders. Select the Gunport GameObject which is the child of your Tank Game Object and assign the prefab to its variable in the inspector. Also, set the to 10 so that the canonBall fly off at a pace faster than a tank. 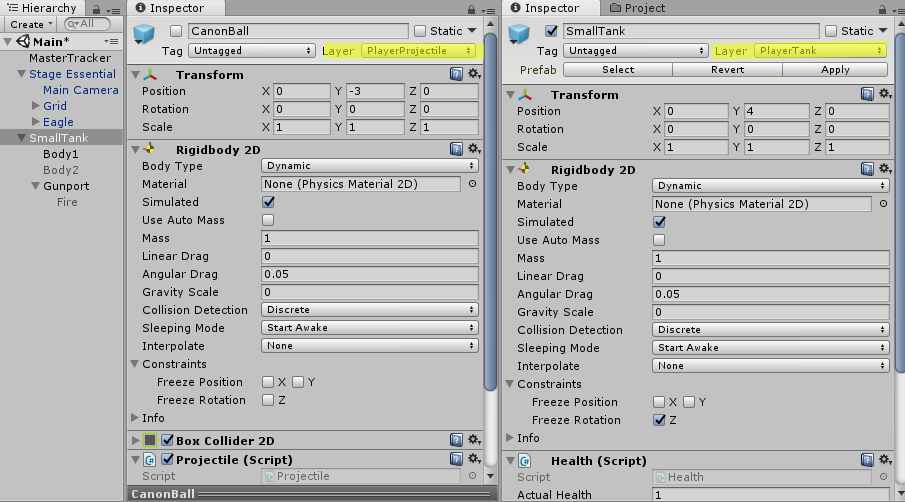 That’s all for Player script till now. Full Script as below.

Let’s start by duplicating our Guinea Pig Tank and naming the Duplicate EnemyTank. Go to its Gunport GameObject and changing the Projectile variable in the Inspector to EnemyCanonBall.

Go to Physics2D settings in Unity () and make the below highlighted changes.
This is to ensure the Enemy’s CanonBall will not collide with the Enemy’s tank. 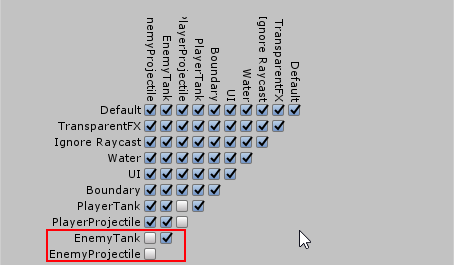 We move to the EnemyAI Script to give enemies the opportunity to fire off the CanonBalls! We start off by creating a WeaponController variable(I’m calling it wc) to store the reference of WeaponController script in the Gunport. We save the reference in the Start Monobehaviour routine using GetComponentInChildren as Gunport is a child of the Tank, so we are getting the component that belongs the child of Tank Game Object.

Next is to create the random timer to fire off. What I will do is to mimic the . I create a routine called to store the command, then I gave instructions for it to invoke FireWhenWanted again in a . I also add an invoke at the Start MonoBehaviour routine so that it will kick off the firing at random. We will not see the shooting of canonballs at 1-second intervals as we are protected by the code to allow one canonball to be fired at a time.

Now we are ready to try a shoot out between the Good Guy and the Bad Guys! I change my sprite with green color so I can identify myself from the enemies. I have also duplicate some more enemy tanks so that I can test my skills!

Great Game! But in the end I got overwhelmed by the enemies. Now and your (rename the tank to and before prefab) as well so that you can use it for test play later. , the prefabs will be used to instantiate the tanks later and they start out as disabled before we enable it for it to appear on the scene. That will be the end of this post. Next post, we will talk about spawning the enemies and player. Here is the full code for EnemyAI.