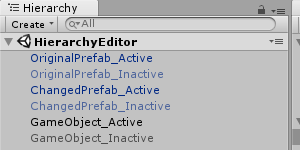 In my case, I could not even notice the differences because my monitor has difficulty showing the contrast!

So I decided to make the hierarchy better for my benefit and share it with you all for yours too. At the end of this, you should be able to have your hierarchy looking at the below. (I have named the game objects to show what type of game object it is representing) 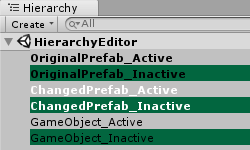 I will also throw in an editor so that you can change the colors if my taste in that does not suit you!

Bulk of the codes here are from Unity3DCollege available in video walkthrough on youtube. What I will do is to tell about my differences and the rest is to check out the video tutorial from Jason of Unity3DCollege who gave a very detailed explanation of the code. In short:

Same as the Core Code, bulk of this code are from the Unity3DCollege youtube video tutorial so check out the tutorial for the explanation. In summary, it is to check if the item at the Hierarchy is a prefab. If it is, set it with a black color bold font.

Differentiating a prefab instance that has changes

Note that I break out from the foreach loop once I found a difference. This is to reduce the strain on Unity running through every modification. I used this on a prefab instance which have a lot of changes(because it has a lot of child game objects which have differences). My Unity Editor was slowing down to the point that I need to force close the editor and remove the script from the File Explorer

This is the easiest of the lot. What we need to do is to get the Game Object that the item in Hierarchy is referring to and check if it is inactive. If it is, we will set a green highlight on the item in the hierarchy.

To create an editor for changing the colors on the fly, we will need to declare some public static variables. To be specific, these will be color variables which will be used to update the color. They will default to their original color.

That is all for the code walkthrough. Below is the full code for the Custom Hierarchy. Next up will be creating the Editor.

Code for the editor is quite straightforward because of the prep works we did earlier.

Enjoy fruits of your labor

Now you can launch your new editor window from Tools->Hierarchy Editor.

You can, of course, adapt it further to add more color to differentiate different game object types.