This is probably most of the people’s top frequent task on Unity Editor. Whenever we place a GameObject on the scene, Unity tends to place it in a random position in the scene. So what people do is to click on the gear symbol on the Transform Section of the Inspector and select Reset to reset its transform for housekeeping or out of necessity. The code below will allow you to have it as a MenuItem to reset the GameObject selected and a shortcut key Alt+r to do this frequent task from you. This code comes adapted from Github Gist of thebeardphantom. In fact, some of my other useful codes use the same code to select the gameobjects. You can also do in bulk this task which makes it even more effecient.

This comes from the annoyance of an updated unity feature(I think it is added after version 4.6) where if you try to add another gameobject(e.g., via duplicate, create or drag and drop) to the hierarchy or scene. If there is already a gameobject with the same name, it will add a suffix of ascending number enclosed with parentheses. See below to know what I mean and how ugly and untidy it looks. (it wasn’t that bad last time…sobz…sobz) 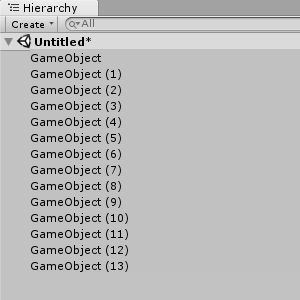 The code below will allow you to have it as a MenuItem to rename the GameObject removing the suffix or a shortcut key Alt+n to do this satisfying task for you. Better still, you can select in bulk to rename at one go!

Another frequently performed task. You will need to lock the inspector a lot of times when trying to drag objects to the inspector as it happens quite frequently the focus in inspector will accidentally move to the objects you want to drag instead. The code is actually from an old unity forum thread. The code below will allow you to toggle lock and unlock on the via a MenuItem or a shortcut key Alt+l to do this common task for you.

There are times where you want to revert a prefab instance changes to the same as its prefab. This useful code will help you do that via a MenuItem or shortcut key Alt+p. And you can do this in bulk!

This is to apply the changes done to a prefab instance to a prefab. You can do this via a MenuItem or shortcut key Alt+a.

Caution: Doing this in bulk selection will result in the changes in the last item selected to overwrite other prefab instances if they are chosen as well
Note: I did a revert to prefab after saving the changes to the prefab. This is due to me noticing that it will duplicate the components(e.g., if I add a box collider as a change and apply the changes to the prefab, it will add another box collider to the game object again). So I overcome it by reverting the game object back to prefab after saving the changes.

Like the Lock Unlock Inspector, this only works for the active Inspector Window.

One of the things I did not mention is on . This is to do a snapshot of the object before we make the change so that we can undo it later if we want. thebeardphantom uses . That did not record the snapshot of the prior of some of my tasks(e.g., revert prefab) so I used RegisterCompleteObjectUndo instead. Below is the full code. One last thing i added is the so that this script will not get picked up when you build your game. Not sure why, without the #if statement, it will crash the build.